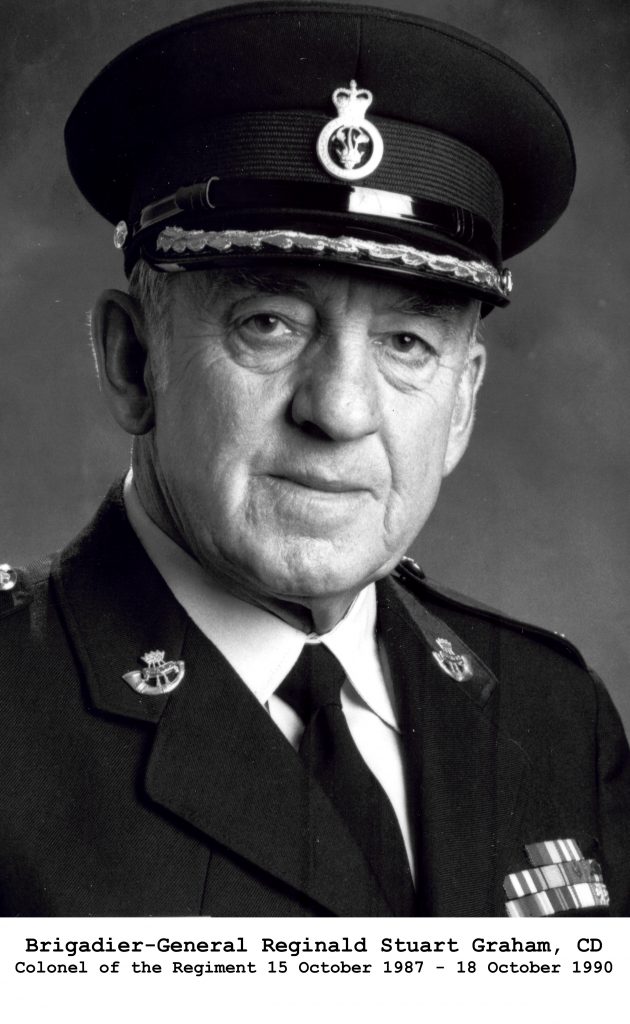 Born 21 July 1919 in Winnipeg, Manitoba, Brigadier-General Reginald Stuart Graham was commissioned as a Lieutenant in Princess Patricia’s Canadian Light Infantry upon graduation from Royal Military College Kingston in 1940. In the fall of 1940 he proceeded overseas as a reinforcement officer for his Regiment then located in England. He served in a number of Regimental and Staff positions with his Regiment and Division in England, Sicily, Italy and North-West Europe. Returning to England in June 1944, he attended the Staff College at Camberley and then returned to Italy again in January 1945. At the end of the War in Europe he was serving as Brigade Major of the 11th Canadian Infantry Brigade in the 5th Canadian Armoured Division, in Holland.

Volunteering for the Canadian Army Pacific Force (6th Canadian Infantry Division) he returned to Canada in June 1945 on promotion to Lieutenant-Colonel to command the 2nd Battalion, PPCLI for service with that force. Later appointed Executive Officer 2nd Canadian Infantry Regiment, he proceeded to the United States Command and General Staff School at Fort Leavenworth, Kansas, for indoctrination into US Army Staff and Planning Procedures. The War ended while he was there and he completed the Course before returning to Canada in October 1945.

Appointments at Fort Churchill, Manitoba, Staff Officer Post-War Planning and Organization at NDHQ, Ottawa followed and then in January 1949, he became the Canadian Liaison Officer to the United States Army Infantry Centre and Weapons Development Board at Fort Benning, Georgia. He returned to Canada to assume command of the Officer Training Company at the Canadian Infantry School in Camp Borden, Ontario, in October 1951. In January 1952, he was posted to the 27th Canadian Infantry Brigade Group, then in Germany, as Brigade Major. On return to Canada in December of that year he assumed the appointment of Deputy Assistant Quarter-Master General at Headquarters Camp Borden. He returned to Regimental Duty in 1954 when he was appointed Senior Major of the 2nd Battalion, The Canadian Guards (formerly 3rd Battalion PPCLI) in Camp Petawawa. He was promoted again to Lieutenant-Colonel in June 1955 to join the directing staff of the Canadian Army Staff College in Kingston, Ontario. He returned to Camp Petawawa in July 1958 to take over command of the 1st Battalion Canadian Guards, and proceeded to Germany in August 1959 until August 1961.

Returning to NDHQ in 1961 as the Army Member of the Joint Planning Staff he served in that position until selected to attend the National Defence College in Kingston in 1963/1964. He was then posted to the United Nations Military Observer Group India/Pakistan for one year before returning to Canada on promotion to Colonel to join the newly created Canadian Forces Training command in Winnipeg as Director of Plans and later as Comptroller.  In 1968 he was promoted to Brigadier-General and became the Chief of Staff of that Command from 1968 to 1971. He then returned to NDHQ for his final appointment as Director General of Organization and Manpower until he retired from the Service in June 1974. Following retirement he accepted an appointment with the provincial Government of Manitoba first as a Consultant and then as Chairman and Managing Director of a Provincial Crown Agency. He retired for the second time in 1979. He assumed the appointment of Colonel of the Regiment on 15 October 1987 and was made Vice Patron of the PPCLI Association in 1990. Colonel Graham passed away 21 April 2003.