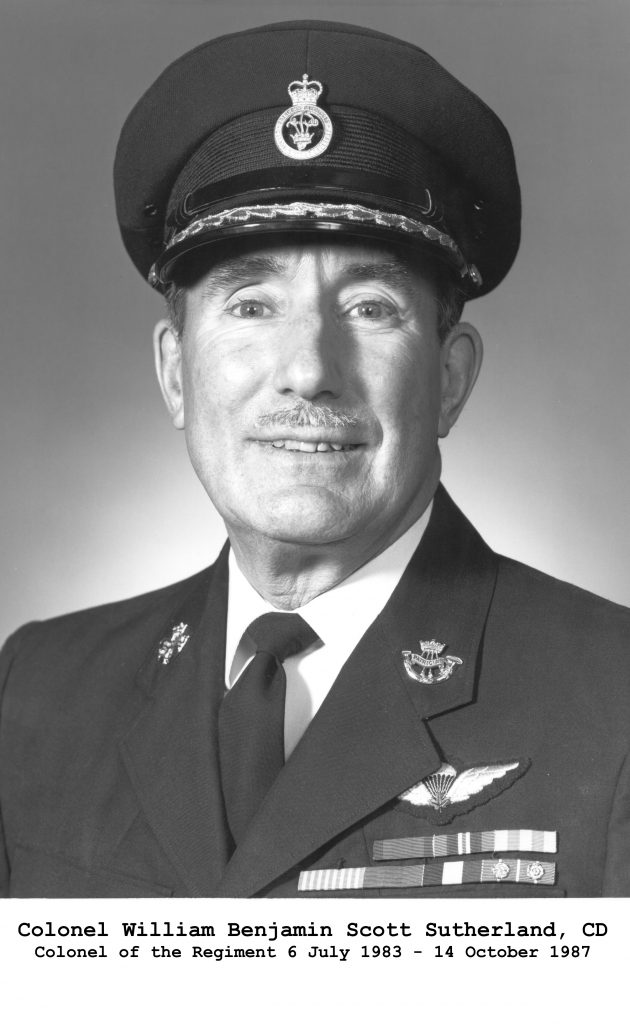 Born in Nelson, British Columbia 27 January 1924, Colonel William Benjamin Scott Sutherland first served with the Calgary Regiment (Tank) from 1941 until 1943. He entered officer training in 1944 and was commissioned Lieutenant in the Canadian Armoured Corps 10 June 1944. Later, in March 1945, he transferred to the Canadian Infantry Corps for service with the Pacific Force. Subsequently, he joined the Patricias at Camp Shilo, Manitoba on 17 March 1946 and was appointed Intelligence Officer.

Lieutenant Sutherland served in several Regimental appointments, including 1st Battalion in the Mobile Strike Force parachute role, and later in the mechanized role and with 3rd Battalion in Korea 1953. He also served an operational tour with 17th Ghurka Division (22 SAS) during the Malayan Emergency, and was a member of the International Control Commission in Vietnam.

Promotions to senior staff appointments at Headquarters Western Command, Army Headquarters and National Defence Headquarters followed. While serving in Ottawa he was seconded to the Privy Council Office and later to the Treasury Board Secretariat. He served as GSO 2 Operations, Western Command, Director of Operational Readiness Land, Director of Sovereignty Planning NDHQ, and Senior Policy Analyst, ADM Policy Branch, NDHQ. While serving, he was seconded to Government Central Agencies and appointed Deputy Head of Task Forces for the Canadian Government; once to the Privy Council Office (Crisis Management Task Force), and on the second occasion to the Treasury Board Secretariat (Compensation in. the Public Service).

Colonel Sutherland has served the Regiment in many ways, including Aide-de-Camp to the Founder, Equerry to the first Colonel-in-Chief, and Secretary of the founding convention of the PPCLI Association. He also planned and organized the Regiment’s Jubilee celebrations in 1964. Colonel Sutherland’s active career spanned 33 years until his retirement in 1975. He then served a term as National President of the PPCLI Association and was later appointed Vice-Patron of that organization in 1987. From 1992 to 1995 he chaired the newly founded Regimental Heritage Committee. In retirement be continued to play an active and supportive role in the Regiment and was presented with the PPCLI Association Certificate of Merit on 21 December 2000. Colonel Sutherland passed away 24 February 2001 and was interred with full military honours at Hope Cemetery in Ottawa.