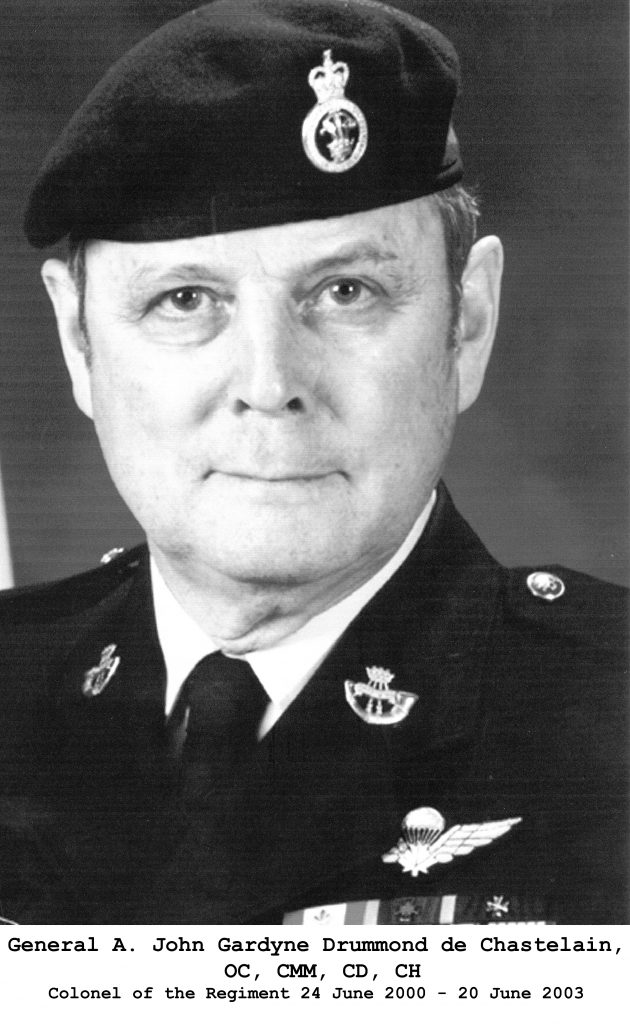 John de Chastelain was born a British subject in Bucharest, Romania, on 30 July 1937, of British and American parents. After immigrating to Canada in 1955 he enlisted as a Private in the Calgary Highlanders, then transferred to the Regular Army in September. He attended the Royal Military College of Canada in Kingston ON, graduating in 1960 with a degree in History and a commission in the PPCLI. In 1962 he was Aide-de-Camp Chief of General Staff at Army Headquarters. His career involved postings as a Company Commander with the First Battalion PPCLI on NATO duty in Germany (1964) and (as a Major) in Edmonton (1967). In 1968 he was posted to Calgary as Brigade Major, 1 Combat Group HQ. In 1970 he was appointed Commanding Officer of 2 PPCLI in Winnipeg. In 1972 he attended bilingual studies at Laval University and was then appointed Senior Staff Officer Quatier General District du Quebec in Quebec City. After promotion to Colonel in 1974, he was the Base Commander in Montreal during the two-year period leading to the 1976 Olympic Games, and the Deputy Chief of Staff of the UN Peacekeeping Force in Cyprus and Commander of the Canadian Contingent (1976).

As a Brigadier-General he was Commandant of the Royal Military College of Canada (1977), Commander of the 4th Canadian Mechanized Brigade Group in Lahr, Germany (1980), and Director General of Land Doctrine and Operations at NDHQ (1982). As a Major-General he was the Deputy Commander of the army field force and Commander of the Force Mobile Command (FMC) Division at St Hubert, Quebec (1983). Upon promotion to Lieutenant General, he was Assistant. Deputy Minister (Personnel) at NDHQ (1986) and subsequently Vice Chief of the Defence Staff.

In September 1989 he was promoted General and appointed Chief of the Defence Staff (CDS), a position he held during the Cold War’s end, the events at Oka, and the Gulf War. In January 1993 he transferred to the Reserves and was appointed Canada’s 18th ambassador to the USA. In January 1994 he was recalled to active duty and reappointed CDS. He stepped down from that post and retired from the Canadian Forces on 31 December 1995.

In November 1995 General de Chastelain was appointed to the three-man International Body on the Decommissioning of Arms in Northern Ireland, presenting its report to the British and Irish Governments on 22 January 1996. In June 1996 he was one of three Independent International Chairmen appointed by the British and Irish Governments to chair the various components of the Northern Ireland multi-party peace talks, which led to the Good Friday Agreement on 10 April 1998. General de Chastelain was appointed to Chair the Business Committee and Co-chair the Strand Two Talks dealing with relationships between Northern Ireland and the Republic of Ireland. In September 1997 he was also appointed to chair the independent International Commission on Decommissioning, whose mandate is still ongoing.

In 2000 He was appointed Colonel of the Regiment, Princess Patricia’s Canadian Light Infantry, a position he held until 2003.