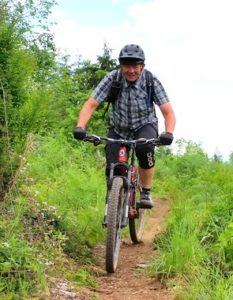 Jerry Kenneth Meyers passed away on Tuesday, July 9th suddenly and peacefully of natural causes while doing what he loved in Cumberland, BC. He was born in Saskatoon, Saskatchewan to Katherine and Kenneth Meyers in 1958. He is predeceased by his parents; his first wife, Jane and his daughter, Angela. He is survived by his wife, Ruenrudee (Pao); his son, Colin; Colin’s wife, Danielle; their son, Colter of Black Diamond, AB; brother, Blaine; Blaine’s wife, Paula; and their daughter, Sydney of Tumwater, WA; half-brother Dean; Dean’s wife Darlene; their children Deanna and Dalton of Willow Bunch, SK, half-brother, Cal; half-sister Joeanne Teichroeb; Joeanne’s husband Bungee of Edmonton; uncle, William Teichroeb of Mission BC; great aunt, Sarah Driedger of Saskatoon with her large and wonderful family.

Jerry started his military career in Army Cadets and continued on to the Canadian Armed Forces Reserves with the North Saskatchewan Regiment in 1975. After that he joined the regular Army with the Princess Patricia’s Canadian Light Infantry in the early 80’s. He changed trades to a Meteorological Technician and was posted to numerous locations and units. These postings included two in Afghanistan and peacekeeping missions such as Haiti and Croatia. He finished his military career as a Warrant Officer, giving pilot weather briefings and other forecasting duties with 408 Tactical Helicopter Squadron in Edmonton, AB.

After retiring in 2013 with 38 years of service, he and his wife Pao moved to Vancouver Island and settled in Cumberland. A place they chose because of its beauty, community, and some of the best mountain biking trails anywhere. Jerry and Pao were very happy with the area and enjoyed many activities together: hiking and making many new friends. He loved spending time with family and felt especially blessed by his grandson, Colter; he loved the new title of grandfather and you could not get that smile off his face when he heard it.

He caught the mountain biking bug somewhere along this journey and it flourished in Cumberland. He was a skilled rider and spent much time working on maintaining trails, working on bikes at Black’s Cycle in Comox, and of course riding. He was a constant presence on the trails while both enjoying and working on them with other members of the Comox Valley mountain biking community, including the United Riders of Cumberland and the local close-knit Mudhuggers. Always quick to lend a helping hand to all. This friendship and community really gave him and Pao a true feeling of home.
He will be sorely missed by all of the people with whom he served, those with whom he rode, those he helped along the way, and of course his family.