On behalf of the Corbould family:

It is with great sorrow that we announce the passing of a wonderful husband, father, grandfather and great-grandfather: Brigadier-General (Retired) Keith Corbould, at the age of 79.

While on holiday in Italy, Keith fell ill and was not able to make his return flight to Canada.  After a week in hospital in Rome, where his strength ebbed and flowed, he succumbed to cardiac arrest on 12 July 2019. Teresa was there with him along with his youngest son, Andre. 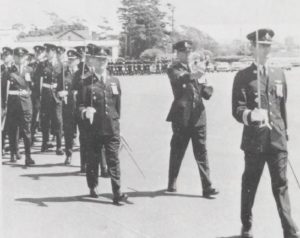 Keith joined the Canadian Military in 1958 and served with 1 PPCLI to include a deployment to Germany during the period when entire Battalions rotated overseas during the Cold War.  He also served as a Squadron Commander at le College Militaire Royal, then again in 1 PPCLI commanding a company in Calgary.  A year of Staff College in Australia was followed by another tour in Calgary working in 1 Bde HQ.  He then served as Commanding Officer of 2 Commando, Canadian Airborne Regiment in Edmonton which also included a deployment to Cyprus during the 1974 Conflict.

After another posting to Bde HQ in Calgary, Keith and Teresa (accompanied by two brats) then moved to Esquimalt BC to command 3 PPCLI (the unit initially stood up by his father at the beginning of the Korean Conflict). To pay for this Command opportunity, he then moved to Army HQ in St Hubert, Que to work as Deputy COS Operations where he was instrumental in developing the Rendez-Vous Exercises to enhance Canadian Army Operational Readiness.  This was followed by a tour as Deputy Commandant of the Army Staff College in Kingston and a year as a student on the National Defence Course.  In 1984, he took command of the Special Service Force in Petawawa and subsequently retired (1986) to take over a Family Fishing Lodge in Tweedsmuir Park, BC.  That Lodge successfully supported separate Airborne Regiment and PPCLI climbs of Mount Corbould in the Region, named after Keith’s Father who served in WWII and the Korean Conflict.

After retirement, he also served as a member of the Co-op Board in BC, and learned more than he ever wanted about how to run a grocery store and fuel business.  In 2010, Keith and Teresa moved from the Bella Coola Valley to Kimberley BC, where they lived a 5-minute drive from the ski hill, renewed long-lasting friendships and developed many new close friendships with great people.

Keith will be missed by many and is survived by his wife of 56 years, Teresa; his two sons Andre (and Kaetlyn) and David (and Tracey); five Grand-Children (Jaclyn, Marcus, Ryan, Gregory and Harrisen), and four Great-Grandchildren (Trinity, Kimberly, Violet and Caysen). Two adopted grand-children include Ed Gerrard (married to Jaclyn) and Shawna Lee (married to Marcus).

Keith was always known to have an opinion (which was usually right), and he cared for all those in his life – family, friends, subordinates, and comrades.  A true leader and someone who many of us used as an example to emulate.