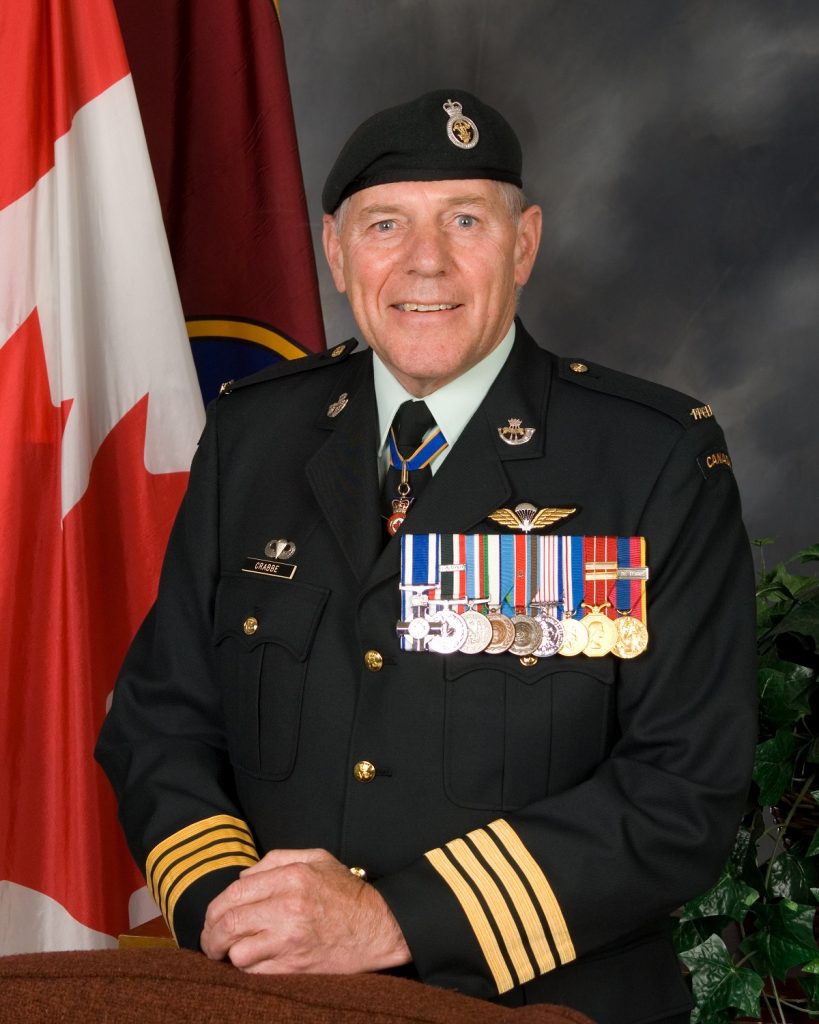 Lieutenant-General Ray Crabbe joined the Canadian Army in Sep 1963 and served in a variety of command and staff appointments in Calgary, Cyprus, Germany and Victoria.

After attending the Army and the Canadian Forces Staff College in 1975-76, he served in Calgary with the 1st Battalion PPCLI and then Petawawa with the Canadian Airborne Regiment. Lieutenant-General Crabbe was appointed Commanding Officer 1st Battalion PPCLI 1981-83, and then joined the Canadian Land Force Command and Staff College in Kingston, ON as a member of the Directing Staff and Chief of Staff. From 1986-89, he served as Chief of Staff Prairie Militia Area in Winnipeg.

In Dec 1989, he was awarded the Order of Military Merit in the Grade of Officer.

He was promoted to Brigadier-General in 1990 and served as Commander Special Service Force in Petawawa 1990-92, and was then appointed Director General Personnel Careers Other Ranks at NDHQ.

Promoted to Major-General in May 1994, he was posted to the Former Republic of Yugoslavia as the Deputy Force Commander of the United Nations Protection Force (UNPROFOR) and Commander of the Canadian Contingent.

Lieutenant-General Crabbe commanded Land Force Atlantic Area Aug 1995 to Aug 1997. In Jan 1996 he was awarded the Meritorious Service Cross, and in June 1997 the National Defence Medal (Gold) from the Government of France for his service with UNPROFOR in the Former Republic of Yugoslavia.

After a brief tour as Commander 1 Canadian Division, he was promoted to Lieutenant-General and appointed Deputy Chief of Defence Staff at NDHQ. In Sep 1997, he was appointed to Commander of the Order of Military Merit.

He retired from the Canadian Forces in Nov 1998 after a military career of thirty-five years and operates his own company. He is a member of several Boards and is past chair of the International Steering Committee for the Standing High Readiness Brigade.

He was appointed Colonel of the Regiment of the PPCLI in May 2010.

Lieutenant-General Crabbe is married to the former Brenda Freeman of Killarney, MB. They have two children, Lia and Derek and four grandchildren. He and his wife reside in East St Paul, MB.