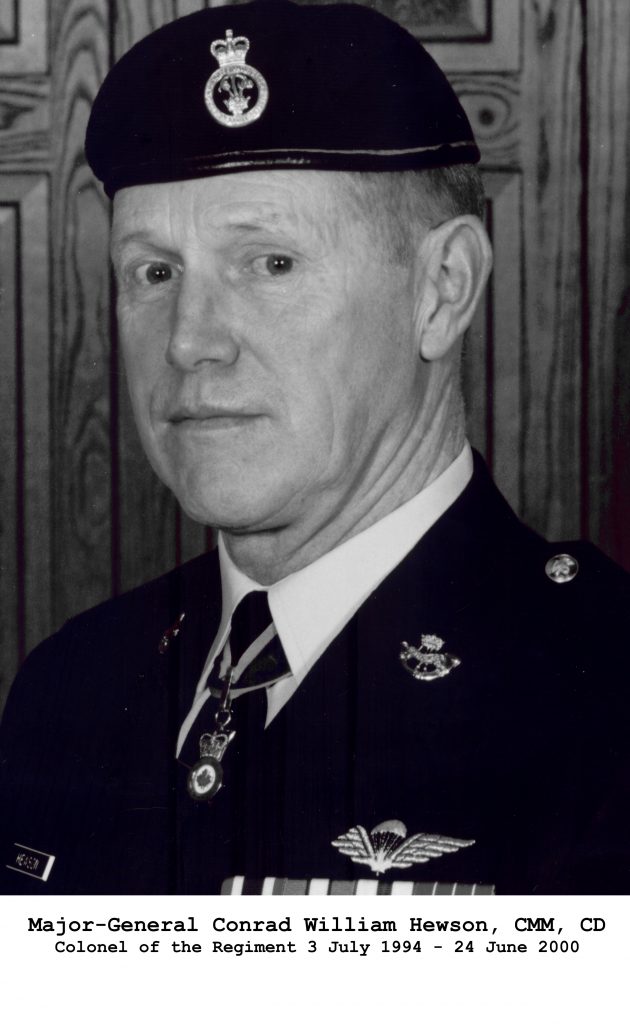 Conrad William Hewson was born in Penetanguishene, Ontario on February 2, 1937. He enrolled in the Canadian Army in September 1955, and attended the Royal Military College under the Regular Officer Training Plan and was subsequently granted a Bachelor of Applied Science (Civil Engineering) degree by the University of Toronto. Commissioned in 1959 as a Lieutenant, Hewson served with the Princess Patricia’s Canadian Light Infantry in Esquimalt, British Columbia, and Hemer, Federal Republic of Germany. He attended the British Army Staff College at Camberley from 1964 to 1965, and subsequently was posted to Headquarters 3 Canadian Infantry Brigade Group in Gagetown, New Brunswick.

Promoted Major in 1967, Hewson served again with the PPCLI in Edmonton, Alberta, being transferred in late 1968 to Mobile Command Headquarters, St. Hubert, Quebec. He served there first as staff officer Infantry, and later, coincident with his promotion to Lieutenant-Colonel, as Senior Staff Officer, Plans and Operations. In 1971, he became Commanding Officer of the 1st Battalion PPCLI in Calgary, Alberta. Following a tour in 1973/1974 as a member of the directing staff of the Australian Army Staff College, Queenscliffe, he was promoted Colonel and posted to Headquarters 1 Combat Group, Calgary, Alberta, as Deputy Commander. In 1977, he attended National Defence College, Kingston, Ontario. From 1978 – 1980, he served at National Defence Headquarters, as Director Establishment Requirements. In July 1980, Colonel Hewson was appointed Deputy Chief of Staff Headquarters, United Nations Force in Cyprus (UNFCIYP). Promoted Brigadier-General in April 1982, he assumed the position of Chief of Staff Headquarters UNFICYP and served in that capacity until July 1984. Throughout the period 1980 – 1984, he was concurrently Commander Canadian Contingent, UNFICYP.

In July 1984, Brigadier Hewson became Director General Intelligence at National Defence Headquarters, and in January 1985, he was promoted Major-General and assumed the appointment of Chief Intelligence and Security at National Defence Headquarters. From 1988 – 1991, he held the position of Assistant Chief of Staff, Intelligence, Supreme Headquarters Allied Power Europe. Upon retiring from the Canadian Forces in 1991, Major-General Hewson became a Director-General in the Communications Security Establishment, Ottawa and retired from that post 15 July 2000. He assumed his appointment as Colonel of the Regiment for the Princess Patricia’s Canadian Light Infantry 03 July 1994 until 24 June 2000.