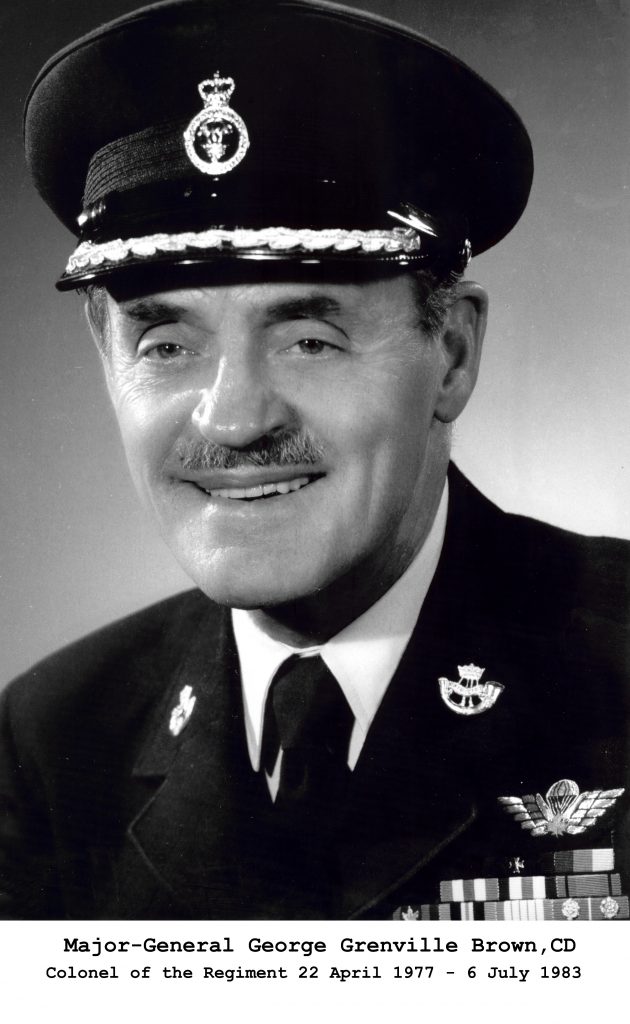 Born 17 June 1922 at Saskatoon, Saskatchewan, George Brown was educated there and in Regina. He attended Royal Military College, Kingston, from 1940 to 1942. He was commissioned in the Seaforth Highlanders and served in Canada, the United Kingdom and North Africa. In 1943 he joined the Loyal Edmonton Regiment in Italy. He was wounded in 1944 and rejoined the Seaforth Highlanders in April 1945 in Holland. Brown was transferred to Princess Princess Patricia’s Canadian Light Infantry (PPCLI) in 1946 and served with the 2nd Battalion in Germany. Promoted to Lieutenant Colonel in 1962, he commanded the 1st Battalion PPCLI in Victoria and Germany until 1965. Brown was promoted to Colonel and Chief of Infantry at Mobile Command headquarters in 1966. He was promoted to Brigadier-General in 1970 and appointed Chief of Staff for Operations, Mobile Command.  From 1972 – 74 BGen Brown was Commander 1 Combat Group, in Calgary.  In 1974 he was promoted to Major-General and appointed Chief of Land Operations at National Defence Headquarters, and in 1975 he was appointed Deputy Commander, Mobile Command. Major General Brown retired from the Army in 1977, and served a six-year honorary term with the PPCLI as Colonel of the Regiment. In 1983 he became Vice-Patron of the PPCLI Association. He died on 14 March, 1995. He was married to Constance Brown and they had three children.