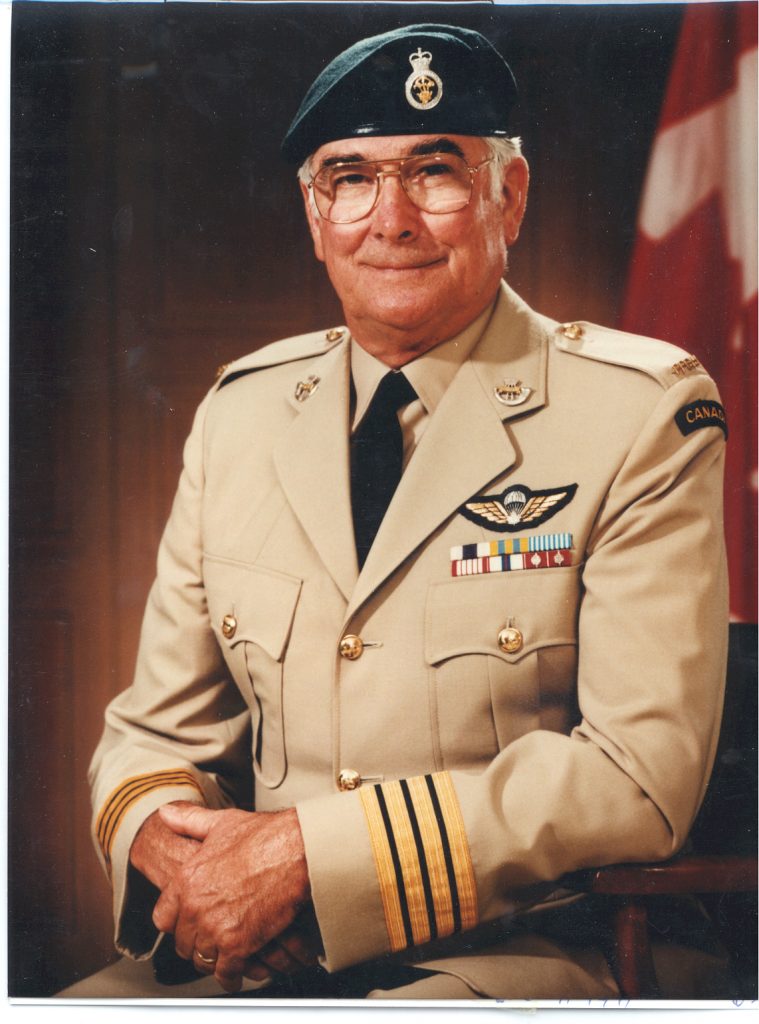 Born in Nelson British Columbia 14 June 1929, Major-General Herbert Chelsey Pitts entered Royal Roads Military College in 1948. Commissioned into Lord Strathcona’s Horse (Royal Canadians) in 1952 upon graduation from the Royal Military College, Kingston, he saw service in Korea starting in July 1952. During that conflict he served as a platoon commander with the First and Third Battalions, Princess Patricia’s Canadian Light Infantry. While serving with the Third Battalion in Korea, he was awarded the Military Cross for gallantry in action, and returned to Canada just prior to the cease-fire in July 1953.

From 1953 to 1954 Lieutenant Pitts studied at McMaster University in Hamilton, Ontario. Upon return to regimental duty he served with the First Battalion, Queen’s Own Rifles of Canada in Calgary, and then as a Staff Officer with the 4th Canadian Infantry Brigade Group in Soest, West Germany. In 1960 he attended the British Army Staff College at Camberley. Upon graduation he was posted to Army Headquarters in Ottawa, where he served for two years as Aide de Camp to the Chief of the General Staff. Upon promotion to Major, he served from 1962 to 1964 as a Company Commander with the Second Battalion Queen’s Own Rifles of Canada. He was again posted to the 4th Canadian Infantry Brigade Group, and served for over two years as the Brigade Major.

In 1967 Major Pitts was promoted to the rank of Lieutenant-Colonel and given command of the First Battalion, Queen’s Own Rifles of Canada, in Victoria, B.C. From 1969 to 1971 he was posted as an exchange officer at the U.S. Army Command and General Staff College at Fort Leavenworth, Kansas, following which he attended the National Defence College in Kingston, Ontario. In 1971 Pitts was promoted to the rank of Colonel and posted to Edmonton to command the Canadian Airborne Regiment for two years. From 1973 to 1975 he served at NDHQ as a Brigadier-General in the Capacity of Director-General of Land Operations. Promoted to Major-General in 1976 he was appointed Chief of Land Operations. Following French Language training, he served in his final appointment of regular service as the Director-General, Bilingualism and Biculturalism until his retirement in 1978.

Major-General Pitts assumed his appointment as Colonel of the Regiment for Princess Patricia’s Canadian Light Infantry 19 October 1990. Prior to that time he served as Colonel of the Regiment, Canadian Airborne Regiment and Colonel Commandant of the Infantry. He has held a number of officer positions in Scouts Canada including President of the National Council and International Commissioner. Currently, he is the National Commissioner for Scouts. In 1994 Colonel Pitts was made Vice-Patron of the PPCLI  Association. Major-General Pitts passed away 27 September 2018.