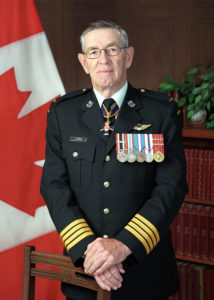 MAJOR-GENERAL (Retd) R.I. STEWART CMM, CD
MGen Stewart began his military service as a rifleman in the Regina Rifle Regiment in 1954. In 1956, he joined the Canadian Army Regular Force and served as a private soldier and non-commissioned officer with the Second Battalion Princess Patricia’s Canadian Light Infantry.

In 1957, he was selected as a Regular Officer Training Plan candidate and attended the University of Saskatchewan graduating in 1960. He returned to the Second Battalion Princess Patricia’s Canadian Light Infantry as a commissioned officer and served in various Regimental appointments until 1965. During 1965-66, MGen Stewart attended the Canadian Army Staff College and upon graduation was assigned as General Staff Officer (Training) to Headquarters 4 Canadian Mechanized Brigade Group in the Federal Republic of Germany. He rejoined the Second Battalion of his Regiment in Germany in 1968 as a company commander.

On return to Canada in 1969, he served with the Canadian Airborne Regiment first as Regimental Major and then from 1971 to 1972 as the Commanding Officer of 2 Airborne Commando. From 1972 to 1973 MGen Stewart held staff appointments in National Defence Headquarters and in Training Command Headquarters.

In 1974, he assumed command of the Second Battalion Princess Patricia’s Canadian Light Infantry in Winnipeg and in 1976 took the battalion to Cyprus. He commanded the Infantry School in Gagetown, N.B. from 1976 to 1977 and the following year assumed the appointment of Deputy Commander, 1 Canadian Brigade Group in Calgary. He attended the US Army War College during 1979 to 1980 and on completion assumed the duties as Chief of Staff Central Militia Area until July 1981.

MGen Stewart was promoted to Brigadier-General 1 July, 1982 and took command of the Special Service Force at Canadian Forces Base Petawawa. He held this position until 8 August, 1984, at which time he was appointed Commandant of the Canadian Land Forces Command and Staff College in Kingston. On 31 July, 1987 he was appointed Canadian Forces Military Attaché, CDLS Washington. MGen Stewart was promoted to Major-General on 1 July 1989 and on 17 July 1989 assumed command of Land Force Central Area.

He retired in Sep 1992 and now resides in Victoria, B.C. MGen Stewart served as Colonel Commandant of Infantry from September 1998 to September 2001. He was Colonel of the Regiment from June 2003 to Aug 2006.