Founding of the Regiment 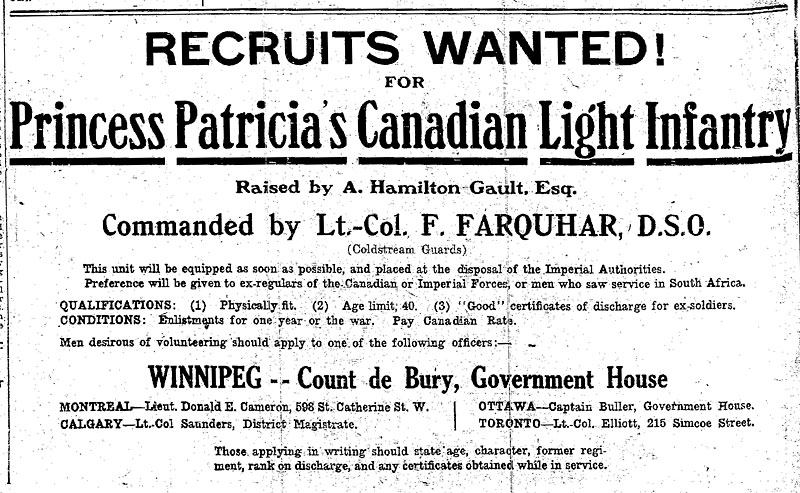 The Founding of the Regiment​

The Regiment was born during August of 1914 in Ottawa, Ontario as a result of the offer from Captain Andrew Hamilton Gault to provide $100,000 to finance and equip a battalion for overseas service.

On 6 August 1914 Captain Gault’s offer was provisionally accepted by the Canadian Government. Authority was granted on 10 August 1914 to raise and equip an infantry battalion, with the remainder of the cost being defrayed by the Department of Militia and Defence.

On 10 August 1914 the Charter of the Regiment was signed and the next day mobilization began. Veteran soldiers flocked from every part of Canada to enlist. Eight days later the new Regiment had a full complement of experienced officers and men. Out of 1,098 all ranks, 1,049 had seen previous service in South Africa or with the regular forces of the British Empire. Almost every unit in the British Army was represented in addition to personnel from both the Royal Navy and Marines.

LCol Francis D. Farquhar, DSO, an officer of the Coldstream Guards who was Military Secretary to His Royal Highness, The Duke of Connaught and Strathearn, The Governor-General of Canada, was selected to command the new battalion.

LCol Farquhar suggested that the Regiment bear the name of the Duke’s youngest daughter, Her Royal Highness Princess Patricia of Connaught. The request was made to the Princess, who graciously consented to the Regiment bearing her name. The “Light Infantry” came about because Captain Gault, a veteran of the South African War, liked the “Irregular Feel” it gave to the Regiment.

The full title of Princess Patricia’s Canadian Light Infantry was too long for everyday use, and the new unit became known as “PPCLI”, with “PPs” or “Pip Pips”, as the most common variants. The Regiment was best known to the general public as the “Princess Pats” or merely the “Pats”, but this partial abbreviation is discouraged within the Regiment which now prefers to be known as the “Patricias”.