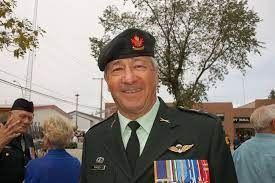 Ray is a native of Lethbridge, Alberta who joined the Canadian Armed Forces in 1969 as a reservist.  He was accepted into the Regular Officer Training Plan in 1972.  Graduating from the University of Lethbridge in 1975 he was commissioned as a Lieutenant in the Princess Patricia’s Canadian Light Infantry.  He then served in a wide variety of staff and command positions.