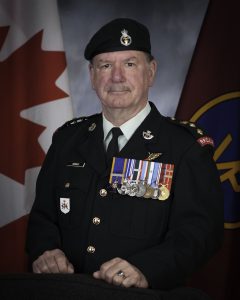 Vince was born and raised in Winnipeg, Manitoba, but graduated from Esterhazy High School, Saskatchewan in 1966.  He enlisted in the Militia in 1964 and was a Lance Corporal before joining the Regular Army in 1967.  He attended both Royal Roads and the Royal Military College, graduating in 1971 with an Honours Degree in International Studies before joining Princess Patricia’s Canadian Light Infantry.

He served as a subaltern with 3 PPCLI in Esquimalt, 3 Mechanized Commando in Europe, and as an Instructor at the Infantry School in Gagetown.  In 1979, he was sent on exchange duties as a Major Company Commander with 3rd Battalion Royal Green Jackets at Oakington Barracks in the United Kingdom and in Cyprus.  In 1982, after Staff College, he was posted to 2 PPCLI in Winnipeg as a Company Commander and deployed with the unit to Cyprus for the second time.

Vince was promoted to Lieutenant-Colonel in 1985.  He served as Senior Staff Officer Individual Training in Army Headquarters, St Hubert Quebec, then as a member of the Directing Staff at Land Forces Staff College, Kingston.  He took command of 1 PPCLI in Calgary, Alberta, in 1987 and acted as the Security Battalion Commander during the 1988 Winter Olympics and also hosted the Regimental 75th Anniversary Reunion.

After command, Vince was posted to Australia as an exchange Directing Staff member and then as a Joint Staff College student.  Upon his return to Canada, Vince joined the Army staff in Quebec as the G3 Operations, Plans and Training just as the Wall had fallen and the new age of peace support and peacekeeping operations was starting – Yugoslavia, Kosovo, Eritrea, Somalia.  In 1993, he was promoted Colonel and became the Chief of Staff of 1st Canadian Division HQ.  Afterwards, he went to the US Army War College in 1996 and then to Toronto to become the Chief of Staff at the Canadian Forces College.  He was promoted to Brigadier-General and became the Chief of Staff of the Army Headquarters in Ottawa in 2000.  In 2002, Vince retired from the Canadian Armed Forces.

Vince and his wife Wendy, married for more than 45 years, then travelled full time in an Airstream trailer around Canada/US until late in 2004.  In 2005, Vince and Wendy went to New York City for a year when Vince became the Chief of the Iraq Desk in the Department of Security of the UN, helping with myriad security issues in Iraq up to the summer of 2006.  Since then the Kennedys spent the better part of four years in Winnipeg with their last living parent, doing volunteer work, and planning for the Regiment’s 100th Anniversary from 2004 until it was over in May 2015.