Three days after docking, on October 18th, the Regiment moved to Bustard on Salisbury Plain and were encamped with the Canadian Division next to the Old Bustard Inn where Division Headquarters was located. 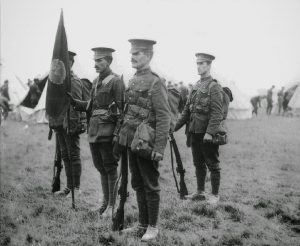 With no communication from the War Office about their future Gault and Farquhar began to get concerned. Now under the command of the Canadian Contingent it appeared the Patricias would be stuck for at least another three months of training at Bustard Camp before joining the fight in France.