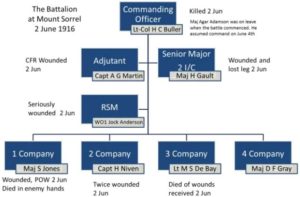 The morning of June 2nd started with the usual routine of light shelling by the German artillery but by nine o’clock the intensity increased dramatically and by ten it was apparent that general action was imminent and reserve battalions were placed at the ready. Minutes later, all telephone lines were cut and the sole means of communication was by pigeon. Worst hit was No 1 company holding the right forward position. Major Stanley Jones was badly wounded early in the action and soon only a tiny remnant remained. One of the platoon commanders, Lt. Angus Wanklyn a young McGill student was killed about 10:30 and soon not a single remaining NCO or officer remained unwounded. Command of the small remaining group fell to Lt Hugh MacDonnell, a young lawyer and recent Queen’s graduate. After exacting a heavy toll on the advancing Germans, the small group was over-run by about 1:30 and the better prepared support trenches became the front line. The wounded Jones and MacDonnell and a small group of wounded soldiers were taken prisoner. Although well treated by their captors, Jones would die within a week. MacDonnell recovered from his wounds and was repatriated in 1917.

Although Number 2 company was in better shape, all officers will injured before noon. The three platoon commanders were all University Company reinforcements. Lt Percival Molson, one of the driving forces behind the scheme was the last to fall. Under the command of their NCOs, the remaining elements of the company held the line against a vigorous attack by German infantry accompanied by flame throwers. In the rear, No. 3 Company was also heavily hit by the opening barrage leaving only No. 4 Company relatively intact. 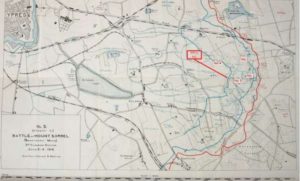 By noon, Gault, the senior major lay severely wounded – he would loose a leg. Colonel Buller mustered all available men to stem the tide of the enemy attack until he too fell, mortally wounded. The striking painting by Capt Kenneth Forbes captures the moment with Buller standing rallying his men. At his feet manning a machine gun is 26 year old Joseph Toyne, one of his originals who was also wounded on that day. Like Gault, he also lost a leg but survived the war. Towards the end of the day, the soldiers and adjutant, entrusted with the care of the Regimental Colour were wounded and it was carried to the rear by Lt Scott on his way to report to brigade headquarters. Although twice buried by shell fire, the now beloved Ric-a-dam-doo remained at the ramparts of Ypres in the care of a Patricia officer attached to the headquarters. Just before dawn, the last of the forward companies withdrew to the reserve line where they joined the 49th Battalion. Major Agar Adamson, who had just returned from leave in England had come forward with the 49th. He assumed command of the tattered remains of the regiment. There had been 151 killed in the battle and two thirds of those had come from the men of the University Companies. Six officers had been killed and a seventh would die of wounds within the week. Two company Sergeants Major had been killed and the RSM 33 and a dozen sergeants wounded. The loss was every bit as devastating as the battle of the originals in 1915.

The 7th Brigade was pulled out of the line to regroup and the Patricia’s once again were faced with the challenge of integrating new arrivals into a battle weary battalion. Agar Adamson, then in command reports the reception of new arrivals:

…the remainder of the old Battn will be drawn up in three sides of a square, the Colour will be marched on and arms presented, then I have to say something to them, after that the Colour will be marched in front of the 556 new drafts, who will be in line a short distance away. They will present arms to that Colour, they will also have to have a speech. The Battn and draft will then be dismissed for five minutes and then the whole formed up into a complete regiment. On Monday we start training hard.

Although it will no doubt seem bizarre to some, in the midst of preparing a new battalion for action, there is interspersed with hard training a variety of diversions for the troops. These included a variety of sporting events and the first appearance of the soon to be famous PPCLI Comedy Company on June 15th. The respite from duty in the line was short lived. At the request of Adamson, Lt Col Pelly was recalled to resume command of the Battalion on August 3rd. The narrative will now leap forward to the spring of 1917. In the interim period the Patricia’s were engaged in their first major offensive on the Somme around the villages of Flers and Courcelette after several weeks of training in offensive operations. The story of the period is a picture of confusion, rapidly changing orders, and often surprising success. For their part, the Patricia’s escaped with lighter casualties than either the RCR or the 42nd Battalion. 125 died between the opening of the Somme offensive and the end of 1916. In October, the Regiment along with the rest of the Canadian Corps moved to the Vimy front. Shortly after settling into the Vimy sector, Lt Col Agar Adamson assumed command of the regiment from Pelly, becoming first Canadian officer to command the Patricia’s.