The Patricias first took their place in the trenches on January 6, 1915, at a location known to the British Army’s soldiers as “Dickiebush”. Trenches were taken over south of St. Eloi from the 53rd (French) Regiment as part of the general relief of the XVI (French) Corps by the II (British) Corps. For the next seven weeks in this water-logged sector, overlooked by the Wytschaete ridge, conditions were similar to those prevailing all along the British front during the first winter. 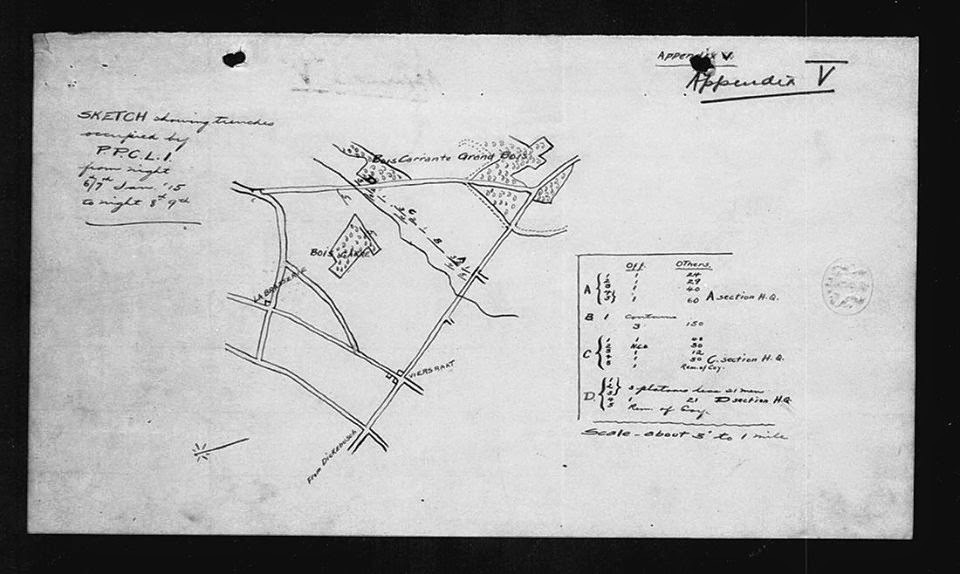 6.1.15. Marched from METEREN to DICKIEBUSH via BAILLEUL, and LOCRE. Lack of boots much felt many men marching with no soles at all to their boots.

Arrived DICKIEBUSH 2:30pm and rested till 5 pm. At 4 pm Major HAMILTON [A.H.] GAULT returned to Bn with general instructions with regard to taking over  the trenches from the 53rd French Regt. 63rd Brigade 32nd Division. Bn marched from X roads ½ mi. S.W. of DICKIEBUSH via DICKIEBUSH to road junction ¼ mi. N.W. of VIERSTRAAT. When the Right Half Bn under Major GAULT took over the 2 sections on the right. The Left Half Bn marched to LA BRASSERIE & took over the remaining 2 sections. Time was lost owing to no guides having been provided by the French: Taking over completed at midnight without incident: Line held by the Bn extended 1150 yds as per attached sketch. Trenches were found to be in a very waterlogged condition: no brasiers & few dug outs: distance from GERMAN LINE 40 yds on our LEFT, 200 yds on our RIGHT. Work of bringing up ammunition to scale of 250 rds per rifle as well as rations continuing till 3 a.m. 7.1.15.