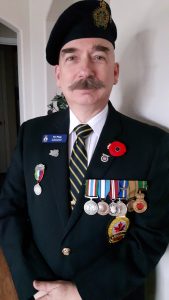 I am from Whitehorse, YT and had served with The Yukon Regiment Army Cadet Corps for six years. I graduated from high school and figured that a career with the Canadian Armed Forces was a good fit. I joined the army October 1976 and after Cornwallis I went to Depot training at CFB Wainwright. Once graduated and “badged” in the Patricias our platoon went to 1st Battalion B Coy 4 Platoon at CFB Calgary. I was trained as a radio op, machine gunner and had a mini driver wheel course too. I was on several major exercises at Batus British Base Suffield, Waincon, Ghost River winter radio exercise, numerous other smaller exercises during the summer and winter and a UN tour of duty in Cyprus during the summer of 1978. I took my release in October 1979 and went back to school at Southern Alberta Institute of Technology. I joined the Royal Canadian Legion in 1980 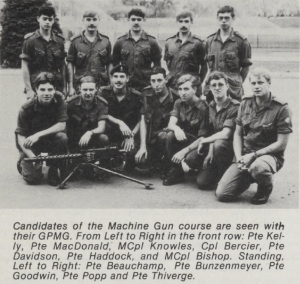